Coady Photography photos
FRANKLIN, Ky. (Sunday, Sept. 5, 2021) — The $750,000 Big Ass Fans Dueling Grounds Derby had a really big — well, let’s just say really big — purse and wound up also having a really big payoff as Accredit paid $75 to win after going wire to wire under Martin Garcia for a length victory over Yes This Time on opening day of the FanDuel Meet at Kentucky Downs. 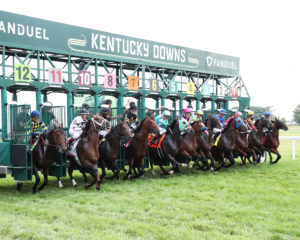 It was easily the biggest purse won by Lexington-based trainer Pavel Matejka winning the biggest race of his training career.
A Churchill Downs allowance winner, Accredit was second in Arlington’s American Derby as the favorite and a close fourth in Ellis Park’s Kentucky Downs TVG Preview Dueling Grounds Derby. Matejka has a farm by his The Thoroughbred Center stable in Lexington, and he had Accredit gallop up and down his undulating fields. That gave him confidence that the son of Flatter would like Kentucky Downs’ course, with its subtle changes in elevation.
Matejka wanted Accredit in the clear, which Garcia did by being in front and setting a leisurely pace over turf that started the day firm but was downgraded to yielding with intermittent light rain early in the afternoon. Yes This Time, with 2020 meet leader Tyler Gaffalione aboard, was in striking position but was unable to threaten the winner and finished second by a length. Accredit covered 1 5/16 miles in 2:10.58.
“Martin did a great job to get him out and in the clear” after breaking on the rail, Matejka said. “Every time he’s in a spot like that, he’s hard to pass. We didn’t want to get the one hole, and we did. But he did great. The last couple of races, he just didn’t have a very good trip. He got stuck behind horses, nowhere to go, and today it turned out perfect. It was a great ride. This is a free-running horse. No traffic and he’ll give you his best.
“He’s a nice horse, and we’ve always liked him. When he gets his trip, I think he can run with anyone. When he was turning for home in the lead, we were very confident. We have a private gallop, a half-mile grass gallop, that is uphill and downhill. That’s where he was training the last couple of weeks, and we knew that he liked it. That made us confident he would like it.”
Garcia jumped out to a two-length lead and pretty much kept it throughout, even while getting away with a half-mile in 49.03 seconds, six furlongs in 1:14.31 and the mile in 1:39.56. He paid $75 to win, going off as the fourth-longest shot in the field of 11 3-year-olds.
“When he ran last time at Ellis, he broke OK, not sharp as he did today,” Garcia said.  “I was on the rail. I didn’t want to get stuck. I was in the lead and tried to run away, so he could be comfortable and happy. When I asked, he just keep going, and I don’t think any horse is going to go by him this time.” 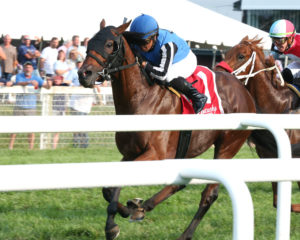 Matejka’s jubilant family and crew ran toward the winner’s circle in celebration, in particular assistant trainer Ellen Pike.
“It was really incredible, because we put a lot of blood, sweat and tears into these horses,” she said. “And he’s a special horse. He’s a very honest horse, and he’ll give you everything he’s got. He’s also a very free-running horse. He doesn’t like to be stuck on the rail, doesn’t like to be stuck behind horses. As soon as he got the early lead and kept a decent pace and was able to withstand the up and down the hills, to see him really push home was incredibly exciting and incredibly rewarding for the work we’ve put into him.”
It was the third overall stakes win for Matejka. He also won the $400,000, Grade 3 Commonwealth Derby at Colonial Downs in 2015 with One Go All Go — who went off at 35-1.
Accredit picked up $437,050 for his efforts and now has earned $572,619 for owner Bob Grayson Jr. of California, with the trainer a minority owner.
“He said he was screaming the whole trip; he was really happy,” Matejka said of Grayson, who called shortly after the race. “I think all family and friends and everybody else was helping. And they’re all happy now, celebrating. It’s a huge win for everyone. We work hard, and it’s a small stable. These races don’t come every week for us, so we try to celebrate and enjoy while we can. This is a big win for us.”
Gaffalione, riding Yes This Time for New York-based trainer Kelly Breen, said he got a perfect trip.
“The winner just got loose on the lead by himself, and got brave out there,” he said. “But it was a huge effort by my horse today. We just didn’t win.”
Said Breen: “He tried right through the wire. Maybe with a couple more jumps, we would have got it. But I’m proud of him. I thought there was going to be more speed, but apparently not today. The jock (Garcia) did a good job, he walked the dog out there, and got the lead all by himself. I don’t want to tip my hat to him, because he beat us. But he rode a smart race, and I was happy that our horse was running at the end.”
It was another 2 1/2 lengths back to Cellist, followed by Modern Science, Red Hornet, Grey Streak, Hilliard, Du Jour, Last Samurai, In Effect and Palazzi. Royal Prince scratched in favor of a stakes at Indiana Grand.
Du Jour, the 9-5 favorite under Rosario, was never a factor in finishing eighth at 9-5 odds.
“He broke OK but I had a hard time to keep him going with the surface a little bit soft,” Rosario said. “I thought he would lay a little more forward. Just try next time.”
Accredit blows to victory in Big Ass Fans Dueling Grounds Derby - The Mint Gaming Hall