Godolphin homebred Adventuring, sent off as the even-money favorite, didn’t disappoint as she scored a front-running, 1 3/4-length victory in the $500,000 Dueling Grounds Oaks for 3-year-old fillies on the Sept. 5 opening-day program at Kentucky Downs. 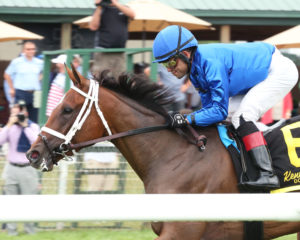 With Joel Rosario aboard, the daughter of Pioneerofthenile, out of the Hard Spun mare Questing, Adventuring turned back several challenges in the 1 5/16-mile test on the track labeled yielding from a day of occasional showers.

“The soft turf didn’t seem to bother her at all,” said Rosario, who has been one of the hot riders this summer at Saratoga in New York. “She was comfortable, and kept going the whole time.”

From the start in front of the stands for the seven-filly field, Rosario quickly plotted his route to victory, in 2:12.33.

“She broke well, and there was not that much speed,” he said. “So, she was able to get up in the race a little bit. There was a horse coming inside, but she was happy out there.”

Viburnum, sent off at 22-1 with Adam Beschizza riding, could not keep up with the winner down the stretch, but still was 3 1/2 lengths ahead of third-place finisher Oliviaofthedesert, a 16-1 show with Brian Hernandez Jr. aboard.

“She ran great,” Beschizza said. “First time stepping up to that distance. I thought she handled it good.”

But on this day, just not as well as Adventuring. “He was always a couple of lengths in front of me,” Beschizza said. “But it’s not like he accelerated away from me. … No one was making up any ground on that soft stuff.”

“She showed up today, and it was a tremendous win,” he said. “I’m very happy for this filly. … And the fractions today, Joel did a very good job, put her in a very good spot. It’s all very good.”

It was the second straight win in the stakes for Godolphin and Rosario, who rode the Michael Stidham-trained Micheline to victory last year.

Jimmy Bell, president of Godolphin USA, indicated that Adventuring is showing some of her potential with her third win in six starts this year.

“When it comes to horses for courses, she seemed to handle it exceptionally well, especially since this was obviously her first time over an undulating course – uphill, downhill, turns, and she just took to it like duck to water,” he said.

What left his most pleased was how she looked at the end of the race.

“She won with a little bit left in the tank, with her ears pricked, just as you like to see it,” he said. “The distance was certainly no problem, and Joel gave her a lovely ride. He stayed up in the good part of the track.

“She’s had quite a few attempts at getting to the turf. She’s shown quite an affinity to it, and is well-bred for it. Overall, it was a very professional effort.”

Adventuring was intended to start her career on turf, but ran into three straight races where it was taken off the grass at the Fair Grounds last winter. She now has won on dirt, synthetic (taking Turfway Park’s Bourbonette Stakes) and turf. Adventuring was a decent fifth in Churchill Downs’ Tepin Stakes and third by a total of a half-length in Ellis Park’s Kentucky Downs TVG Preview Dueling Grounds Oaks.

Bell said where Adventuring goes next is up in the air and will talk it over with Cox.

“I know Brad was looking forward to this race,” Bell said. “He thought the distance would be no problem whatsoever. She’s just a very athletic, very balanced filly, and she showed that today. That course demands that.”

Added Abrego: “It was very good for her, to make her a stakes winner, especially here at Kentucky Downs.”

Bell also gave credit to the track. “They’ve done a great job down here, it’s a great atmosphere, with top-end racing,” he said. “Obviously you’ve got some great horses coming in for these races, and top jocks, so it makes for just a very festivious afternoon with some really top-end racing – where everybody can come out and enjoy themselves and see some really, really good racing.”