Adkins was on hand as the Official Music Ambassador for the 2022 FanDuel Meet at Kentucky Downs, with the award-winning, Grand Ole Opry member autographing the guitars that serve as trophies for the track’s graded stakes and the Nelson’s Green Brier Tennessee Whiskey Music City Stakes.

“I remember when I was a little kid watching my daddy get dressed up because he was going to the horse races in Hot Springs. He used to go to Oaklawn Park,” Adkins said. “I grew up in the northwest corner of Louisiana, and that was the closest track at the time. As soon as I was old enough, I started going to the horse races with my dad. I just love to go to the horse racing. I like to see the ponies run. On the road, I’ve had the opportunity to go to a lot of tracks around the country. If I’m in town on a Saturday and they have a track, I go. 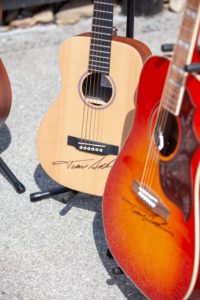 “This is my first time to be here. I was telling my kids driving up here – I brought two of my daughters here today – I said, ‘I can’t believe I’ve lived in Nashville for 30 years now and this is the first time I’ve been to Kentucky Downs.’ It’s a great little track. It’s a neat track. I mean, it’s a very unique track. First of all, it’s just turf, and it’s got that sharp first turn down there. I’ve never seen a track like this.”

When he was asked about signing the guitars as trophies, Adkins said, “I thought, ‘Great! Who’s paying for the guitars?’ Not me. ‘Sure, I’ll sign ’em.’ I think it’s kind of cool.”

Adkins also stars in the FOX country music drama MONARCH, alongside Susan Sarandon and Anna Friel. The multi-generational series about America’s fictional first family of country music premieres on Sunday, Sept. 11. Adkins then will appear on the Academy of Country Music Honors broadcast on Tuesday, Sept. 13, on FOX (7 p.m. Central), performing his cover of “A Country Boy Can Survive” from MONARCH.

“It was almost like having a real job,” he said of filming the show. “I had to get up Monday through Friday every day and go to the set, learn my lines, do this whole thing — pretend to be an actor. Might be the closest thing to a real job I’ve had for 40 years. I loved every minute of it. It was great. I’m excited about the show coming out. I hope people like it. I think they will. Just a wonderful cast that I had the opportunity to work with, but music is the star of the show.”

Adkins, who lives south of Nashville, said he expected to be leaving the track with two new racing fans in his daughters.

“I’m at the horse races and sharing with them what I love about horse racing,” he said. “Now they’re hooked, too, I think.”