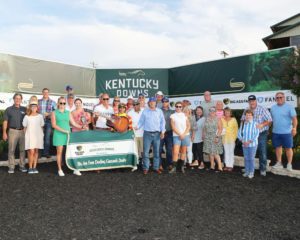 (Photos: Kitodan gave trainer Eric Foster and his owners the biggest victory of their career – along with the guitar trophy signed by Trace Adkins. Coady Photogray)

FRANKLIN, Ky. (Monday, Sept. 5, 2022) — Eric Foster won the biggest race of his training career as 20-1 shot Kitodan took command with an eighth-mile to go en route to a four-length victory over Grand Sonata in the $750,000 Big Ass Fans Dueling Grounds Derby at the FanDuel Meet at Kentucky Downs.

The 11-race card was staged Monday after being postponed from Sunday following severe weather on Saturday that forced Kentucky Downs to call off the final four races that day.

“After worrying all week about the weather and the turf, I just knew we had him ready,” Foster said, adding of co-owner Doug Miller: “Doug always says, ‘I just want to be prepared for when everything goes right’ and I always repeat it back to him. With my guys, my partners, they don’t care to get beat. It doesn’t hurt them as bad as it does me and that helps me to do a better job. I just can’t hardly talk. I’ve never lost my voice like this, so apparently, I was pretty excited.”

Foster, who trains at Ellis Park and his farm near Owensboro, won his first graded stakes, by far his biggest payday as Kitodan picked up $432,450 and the Trace Adkins-signed guitar trophy that goes to the winners of Kentucky Downs’ graded stakes.

Foster and his partners — his wife Brooklyn, Miller and Bill Wargel — claimed Kitodan for $80,000 out of an allowance/optional claiming race May 15 at Churchill Downs. The race before he had won Turfway Park’s $200,000 Rushaway Stakes for trainer Mike Maker, who had claimed the horse for $35,000. In his first start for his latest owners, Kitodan promptly won Churchill Downs’ $200,000 Audubon Stakes on June 4 to give Foster his first stakes victory of any kind.

Obviously Kitodan, who had been a $9,000 yearling, topped that Monday.

Jockey Gerardo Corrales had Kitodan reserved in ninth early on in the full field of twelve 3-year-olds, then passed half the field in the 5/16-mile stretch on his way to the dominate victory. Kitodan closed into soft opening fractions that were the norm for the day on a turf course rated good. Double Clutch led through the first quarter-mile in 25.63 seconds, the half in 52.29 and six furlongs in 1:17.62. The 1 5/16-mile race was timed in 2:15.41, with Kitodan paying $43.48 to win as the seventh choice.

Jockey Tyler Gaffalione said of runner-up Grand Sonata’s performance: “I was really proud of his effort today. I got in tight a couple of times but he never shied away. It’s a shame the winner got away from us because he did run such a good race.”

None of the horses prominent in the early stages were around at the end. Grand Sonata came from sixth to finish second, with Mount Rundle another 3 1/2 lengths back in third and a head in front of Always Above in fourth.

After the Audubon, Kitodan finished fourth on Churchill Downs’ American Derby that was taken off the turf. He then finished fifth, beaten only 2 1/2 lengths, against older horses in Ellis Park’s Henderson Turf Mile.

“We know he’s better long,” Foster said. “The last race at Churchill, of course, was off the turf on the dirt, so that was very hard. We wanted to try him because we knew he would give a good effort, but probably not as good as he is on turf. This is the second time we’ve got to run him on the turf against 3-year-olds, and he’s getting stronger. Bill ran into (Mike) Maker in the stakes room at Churchill and he told him that the distance was going to be on our side. That was before we ran in the Audubon. He’s just proven he wants to go longer.”

“The stars were aligned today,” Miller said, adding of being the third No. 4 horse to win on the card, “We were the Holy Ghost horse today. Bill and I, we’re two small grain farmers from Gallatin County, southeastern Illinois. We live in the same county. We’ve been lifelong friends and we started partnering about a year and a half ago. Things have gotten great since we got with Eric.”

Miller said he had lost every race betting up until Kitodan. Not only did he cash at the windows, but there’s his cut of the purse money. “It feels good,” he said. And he knows where part of the money is going, adding, “I’m buying a Big Ass fan.”

The Dueling Grounds Derby was Foster’s seventh graded stakes appearance. Asked how it felt to beat Hall of Famer Todd Pletcher, he said, “I don’t know if I can outrun Todd in a footrace, but I know my horse outrun his horse today.”

Asked what’s next, Foster said: “Go home, get your voice back, go to Indiana tomorrow and Wednesday, back up here Thursday and back up here Saturday for another big race.”