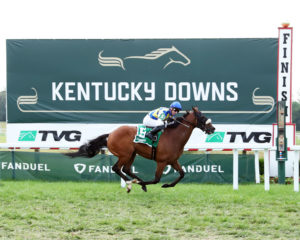 The 15 horses entered Saturday for the Tapit include the winners of last year’s Grade 1 Keeneland Turf Mile (In Love, who won a division of the Tapit in the prior race); Grade 2 Santa Anita Mathis Mile winner (Law Professor); $750,000 Big Ass Fans Dueling Grounds Derby (Accredit, making his first start in a year); and Grade 3 Jeff Ruby Steaks (Like the King).

The Brazilian-bred In Love, who drew post 12, is trained by Paulo Lobo for owner Bonne Chance Farm, which also teamed to win last year’s $1 million Calumet Turf Cup (G2) at Kentucky Downs with Imperador. In Love finished a respectable seventh, beaten a total of 3 1/2 lengths, in last fall’s Breeders’ Cup Mile at Del Mar. He was eighth in his two starts this year, both Grade 1 races.

Also in the Tapit: Megacity finished first in the Texas Turf Classic in his last start but was disqualified to second behind his stablemate Field Pass; Peace Achieved, trying to regain his form that saw him win the Kentucky Downs Juvenile Mile and Keeneland’s Grade 3 Bourbon in 2019; 2020 Tapit winner Ramsey Solution, who romped in his only start this year; Woodbine allowance winner Souper Dormy, in his first stakes since finishing a very close third at 47-1 in Kentucky Downs’ 2019 Franklin-Simpson; and multiple graded stakes-placed and 11-time winner Shadow Sphinx, making his first start for California trainer Kristin Mulhall after being claimed for $50,000. The 7-year-old Shadow Sphinx would be in his first stakes in his 29th start and after earning $341,152.

Twelve horses can start in the Tapit, with Spanish Kingdom, Bakers Bay and Newsworthy  on the also-eligible list and requiring defections by 9 a.m. CT on race day to run.

The Kentucky Thoroughbred Development Fund accounts for $200,000 of the purse, for which only registered Kentucky-breds are eligible.

Eight of the 10 races are Thursday’s card drew at least 12 horses.

Stakes nominations and past performances all on line