King of the Turf belt trophy as unique as contest

FRANKLIN, Ky. (Tuesday, Jan. 25, 2022) — Kenny Mollicone established himself as the National Turf Handicapping Champion by winning the King of the Turf Handicapping Challenge last September during the FanDuel Meet at Kentucky Downs. Now he’ll have the belt to prove it.

Mollicone, a 47-year-old real-estate developer from Somerset, Mass., will be presented the Global Tote King of the Turf Championship Belt during Sunday’s awards dinner that wraps up the National Horseplayers Championship (NHC) at Bally’s Las Vegas. The Global Tote belt was designed to mimic boxing’s iconic world championship belts. 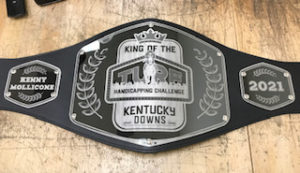 Asked if he’s been getting the proper respect for being King of the Turf, he said with a laugh, “Believe it or not, I’ve had more than a few people who bet horses stop me and go, ‘Hey, King of the Turf!’ It’s pretty funny.”

Mollicone won the six-day competition based on Kentucky Downs’ races with an aggregate bankroll total of $5,783.90 after playing in all three of the individual two-day, live-money contests. That gave him a comfortable $1,163.90 advantage over runner-up Christy Moore of Fishers, Ind. Mollicone also earned $20,000 as the overall winner.

“Like Kentucky Downs, the King of the Turf Handicapping Challenge is one-of-a-kind in American racing,” said Dallas Baker, Head of International Operations for Global Tote’s parent company, BetMakers Technology Group. “We wanted our King of the Turf to get a champion’s trophy as unique as the tournament format and its venue. It’s especially appropriate to use boxing’s fabled world-championship belts as our inspiration for an event in Kentucky, which of course gave us Muhammad Ali.”

Eleven competitors earned Kentucky Downs-sponsored berths for the NHC, which runs Jan. 28-30. Moore, who already had earned the maximum two NHC qualifying seats, instead received an entry for the Breeders’ Cup Betting Challenge, in which she finished fourth out of 522 entries.

“An unmatched layout and quality of turf racing gives Kentucky Downs such amazing content that serves as the ultimate ingredient with which to concoct a world-class contest series. I’m excited to work with the team to create this year’s contest series.”

While the King of the Turf Handicapping Challenge features live money, with players keeping their final bankroll in addition to any prize money, the NHC’s format utilizes mythical $2 win and place wagers on a single horse in mandatory and optional races. Competitors must play 18 races each of the first two days, after which the top 10 percent of entries based on mythical bankroll qualify for the third day’s semifinals, where players pick their 10 races to play. The subsequent top 10 players advance to the Final Table, featuring seven mandatory races.

Mollicone finished 194th in last year’s NHC out of 563 entries, his first time qualifying for the world’s most prestigious handicapping competition.

“I had a horse that was 16-1 in the last race at Saratoga and got disqualified,” he said of the COVID-delayed 2021 NHC. “If he hadn’t been taken down, I’d have been in the semifinals. I’m still sick about it. Watch the replay.”

With Kentucky Downs picking up a seventh racing day for 2022, the format for the King of the Turf Handicapping Challenge has not yet been set. Kentucky Downs will race Sept. 1, 3, 4, 8, 10, 11 and 14. Mollicone says he’s participating however it’s structured.

“One hundred percent,” he said. “I’ve got to defend myself. Have to go for another belt.”