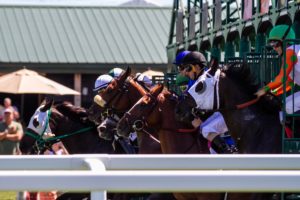 “We look for the race meet to be largely more of the same,” said Ted Nicholson, Kentucky Downs’ vice president for racing. “In the case of Kentucky Downs, that’s become a very good thing: record purses, full fields, low takeout, the best jockeys and trainers in the country and the best extended turf racing outside of Europe.

“Still, we do have new features: a Spanish-language broadcast and web content in partnership with Daily Racing Form, two new barns and wifi throughout the facility. And we’re always working to enhance our video product.”

For horse and sports enthusiasts, as well as those seeking an outdoor entertainment option, Kentucky Downs’ slice-of-Americana atmosphere offers unique experiences from the free admission in front of the Mint Gaming Hall and tailgating at the top of the stretch to the ticketed open-air Finish Line Pavilion.

Reserved seating in the Finish Line Pavilion remains available for online purchase every day but Sept. 10, which is sold out. Tickets are sold in tables of eight or groups of four at kentuckydowns.ticketspice.com/tickets. New this year: Individual tickets will be sold both online and at the track on race day as inventory permits.

The jockeys and trainers expected to compete at Kentucky Downs are a Who’s Who of horse racing, including at least seven Eclipse Award-winners, nine winners of Triple Crown races and 13 winners of Breeders’ Cup races. Those include past meet leaders Tyler Gaffalione, Florent Geroux and Julien Leparoux, who will ride all seven days at the meet, while New York-based stars Joel Rosario, Jose Ortiz and Irad Ortiz will ride after Saratoga closes on Labor Day.

“It’s gotten more and more popular every year — more people going, not just running,” said trainer Rusty Arnold, whose 26 career wins at Kentucky Downs rank fifth all-time. “I love the place. It’s just unique. I grew up in Kentucky. I like the atmosphere. It’s a little more relaxed; it’s not stuffy. I kind of compare it to tailgating before a football game.”

At 1 5/16-miles, Kentucky Downs’ kidney-shaped course matches Belmont Park’s Widener Turf Course as the largest grass track in North America. Kentucky Downs, however, has dips and rises and an expansive far turn that starts as right-handed before sweeping to the left and ultimately taking the horses into the long dog-legged stretch.

Horses competing for more than $18 million

The track opened in 1990 as Dueling Grounds, a steeplechase course literally dropped down in a field. After several ownership changes and years of struggle – including shutting down in the mid-1990s — the track gained stability and championed a game-changer by instituting historical horse racing in 2011. Kentucky Downs’ growth has skyrocketed under the ownership group headed by Ron Winchell and Marc Falcone, who bought the track in 2019 and rebranded its historical horse racing operation as The Mint Gaming Hall at Kentucky Downs.

Horses this meet will compete for more than $18 million, including purse supplements for registered Kentucky-breds from the Kentucky Thoroughbred Development Fund (KTDF). Maiden races for Kentucky-breds will go for $150,000, highest in the world, with allowance races $160,000 and $170,000.

“To a small guy who might only have one or two horses in training, that makes his year if he can win one of those races,” said trainer Tommy Drury.

Said jockey Rafael Bejarano: “Even if you finish second or third, the purse of the races are so high, they’re huge. It’s one of the best meets in the United States. Everybody gets excited.”

There will be 17 stakes races worth more than $10 million, including eight graded stakes. Three races will be worth $1 million: The Grade 2 Kentucky Turf Cup at 1 1/2 miles and Grade 2 FanDuel Turf Sprint at six furlongs, both on Sept. 10, and the Grade 3 WinStar Mint Million at a mile that headlines the Sept. 3 card.

The Turf Cup and Turf Sprint are Breeders’ Cup “Win and You’re In” Challenge Series races, with their winners receiving a fees-paid spot in the corresponding races in the Breeders’ Cup World Championships Nov. 5 at Keeneland Race Course in Lexington. NBC Sports will broadcast both races.