Oldie but goodie! Arklow back for Round 5 in Turf Cup 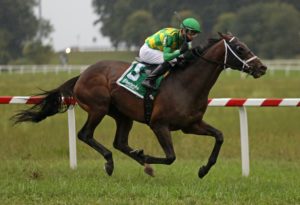 FRANKLIN, Ky. (Monday, Sept. 5, 2022) — Just a couple of words are needed to describe Donegal Racing and Joseph Bulger’s Arklow, who clearly loves Kentucky Downs and is headed to his fifth appearance in the $1 million Kentucky Turf Cup Saturday: Old. Dependable.

With two wins and two seconds in his first four tries in the 1 1/2 miles Grade 2 Turf Cup, the 8-year-old son of Arch has made it clear he is a horse for the distinctly different course on the border of Kentucky and Tennessee. Though he has won races at five other American tracks, Arklow has earned $1,395,450 of his career total of $3,012, 246 at Kentucky Downs during his four September visits.

“He likes it and when a horse likes it you take advantage of it because there are a lot of horses that do not like it,” trainer Brad Cox said. “He is a horse that does relish Kentucky Downs. We’ll see how it goes.”

No surprise that Arklow has been pointed for another start in the Turf Cup, which Donegal Racing head Jerry Crawford calls the horse’s Breeders’ Cup. He prepped at Saratoga with a second by a half-length to Rockemperor under Irad Ortiz, Jr. in the Grade 2 Bowling Green on July 31.

“He could not be doing any better,” Crawford said. “His first race off a lengthy layoff; we gave him a long layoff on purpose. He was dead sound when we turned him out, and he was dead sound when we brought him back and he’s dead sound today. So we’re pretty excited about that at age 8. His comeback race at Saratoga, he could not have run any better. Irad Ortiz would be the first to tell you that it was a race we should have won. So we’re coming to Kentucky Downs with a lot of confidence.”

Cox has had Arklow in his barn for seven seasons and 37 starts and is impressed with how he continues to deliver, as he did again early in the tough Saratoga meet.

“When he comes off a layoff you think ‘will he make it back?’” Cox said at Saratoga, “but when he gets back, he does well. He breezed fantastic a couple of days ago here.”

In the Bowling Green, his first start with Ortiz, Arklow encountered some traffic between the quarter and three-sixteenth poles and had to alter course.

Donegal purchased Arklow for $160,000 at the 2015 Keeneland September yearling sale. By Arch and out of an Empire Maker mare, he was prepared for a career on dirt but failed to win in his first five starts. Arklow broke his maiden in April 2017 at Keeneland in his turf debut and promptly won the Grade 2 American Turf the next month on the Derby Day program at Churchill Downs.

Since he proved himself on turf five years ago, Arklow has not raced on dirt. At Saratoga this summer all of his breezes were on the grass course at the Oklahoma training track about 200 yards from Cox’s barn.

In 2018, when the Turf Cup was a Grade 3, $750,000 race, Arklow came running under Florent Geroux to edge Bigger Picture by a half-length at 6-1. He was the 9-5 favorite in 2019 and ended up 3¼ lengths behind eventual Grade 1 winner Zulu Alpha. In his next start that season, Arklow snagged a precious Grade 1 victory in the Joe Hirsch Turf Classic Invitational at Belmont Park.

Cox added blinkers to Arklow’s equipment for the first time for the 2020 Turf Cup and he snapped a five-race losing streak with a win at 5-1 over Red Knight and Zulu Alpha.

Last year, after winning Churchill Downs’ Grade 3 Louisville in May, running fifth in the Grade 1 United Nations at Monmouth Park in July and then seventh by 1 3/4 lengths in the Grade 2 Del Mar Handicap, he returned to Kentucky Downs. Cox had a succinct analysis of the race: “He was second last year. Should have won.”

Arklow and Geroux were unlucky in the long stretch and the problem probably cost them a victory. Geroux tried to split horses as the pace quickened, but the hole closed and he was forced to steady briefly as Imperador was surging toward the leader, Glynn County. Arklow got rolling again but came up a neck short to Imperador’s track record of 2:25.10.

“Because he has traditionally come from a ways back, he can have trouble with the trip,” Crawford said. “But he’s also proven he can be a little more forwardly placed. He can run more than one way.”

Arklow, named for a town in southeast Ireland near Dublin, comes into the Turf Cup with graded stakes wins in five consecutive years. With his 9-9-2 record, he has finished in the money in 54 percent of his starts. He has competed on 12 tracks and has been ridden to victory by six jockeys. Though he didn’t take his owners to the Triple Crown, which was the original hope, Arklow has proven to be a compelling, gritty warrior.

Arklow will go to the post Saturday for his fifth swing in the Turf Cup, which carries a big purse and is a “Win and You’re In” series race for the $4 million Longines Breeders’ Cup Turf at Keeneland on Nov. 5.

“There are obviously financial rewards in a race this big,” Crawford said. “I can honestly say that we’re all pulling for him so much, that’s the bigger motivation, as he’s gotten older and been able to continue to thrill his ownership group. People are so enamored with him.”

Oldie but goodie! Arklow back for Round 5 in Turf Cup - The Mint Gaming Hall